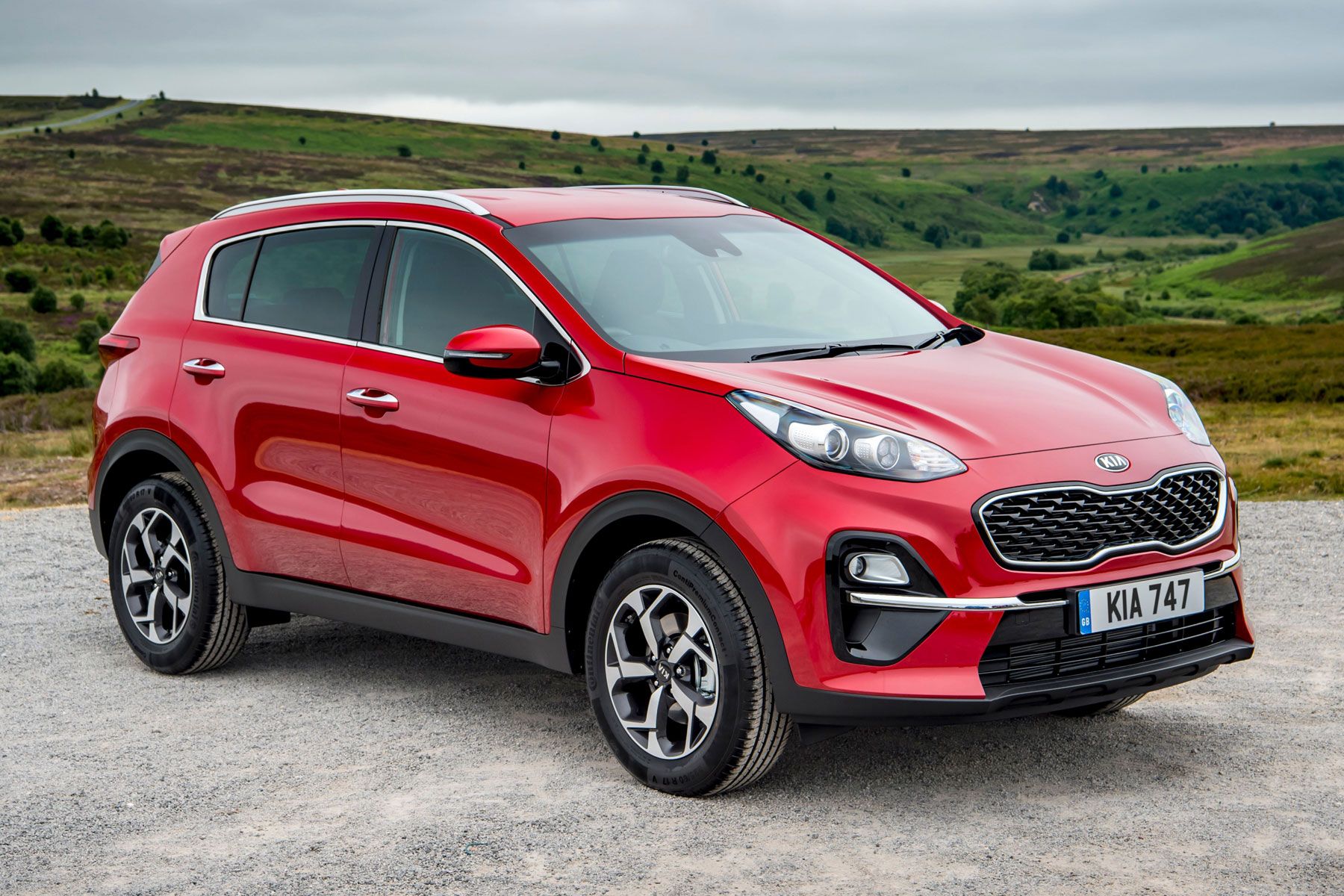 Whether you’re looking for style, comfort, economy or practicality - there’s bound to be an SUV for you. Here’s the ten best used SUV UK models on the market right now.

Often based on hatchbacks - SUVs - offer the performance of their smaller siblings, along with more space and a higher driving position. It’s really no wonder so many people trade up to an SUV these days.

Some are sporty, some are refined, some are great at the whole lot. Check out which used SUV models we think ought to be on your shortlist. 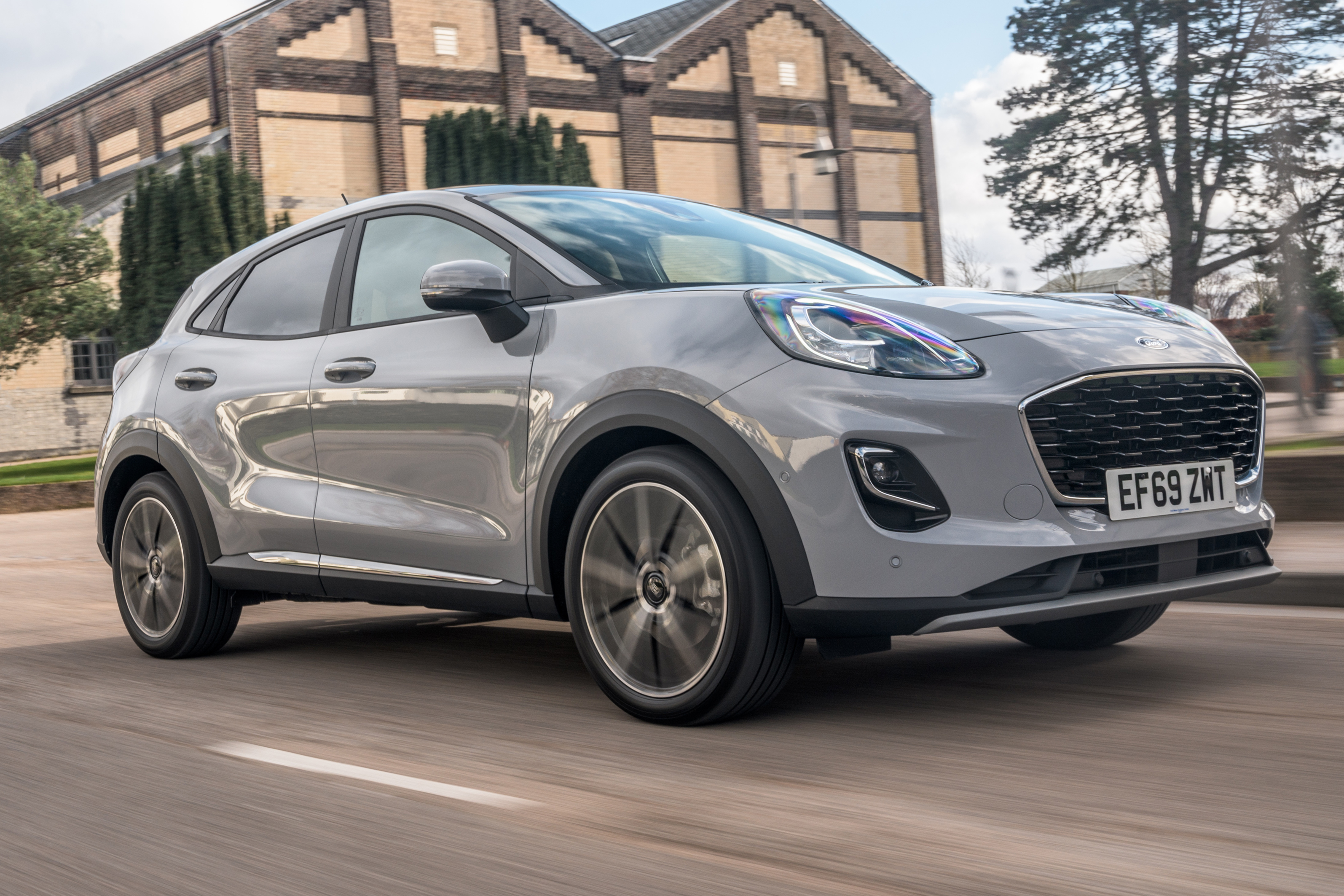 The Ford Puma is one of the most desirable small SUVs on sale. And for good reason. The Puma is basically a bigger, more comfortable, more versatile Ford Fiesta - so it makes total sense that it’d be just as good as an all-rounder. If we were to be picky, some might find it a little small. On the plus side, it has a huge boot, partly thanks to a wipe-clean storage area dubbed the ‘megabox’ under the boot floor. You also can’t really buy a basic Ford Puma, which explains why it looks relatively expensive. But that means you get features like cruise control, an eight-inch navigation system, rear parking sensors and massage seats on the entry-level car. All the trims are great, but Titanium models will suit buyers looking for comfort while ST-Line looks and feels a bit sportier. In terms of engines, the EcoBoost 125 will suit most buyers, although it’s hard to ignore the temptation of the more powerful 155 version. There’s also a hot ST model. 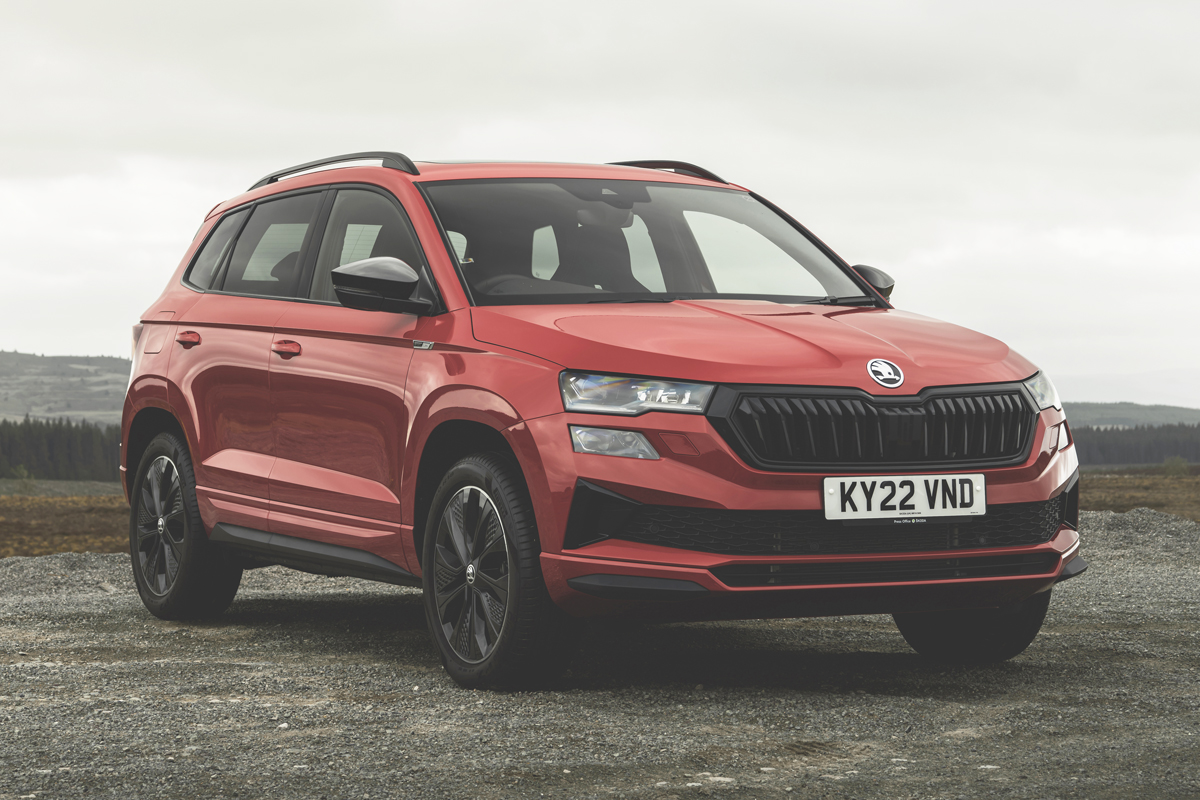 The Skoda Karoq is a highly impressive all-rounder. For buyers who need a roomy interior and load-lugging ability, the Karoq will be the perfect workhorse. But it also offers a classy interior, generous level of equipment and an easy-going nature that makes it appealing to those who aren’t wanting heaps of style or performance. The best features for those who desire practicality are the clever removable seats, massive boot and generous passenger space. The excellent 1.5-litre TSI petrol is the one to go for if you don’t plan to cover lots of motorway miles or tow a caravan though. It offers smooth performance and fairly reasonable efficiency. The SE trim offers the best value, whether you are planning to buy the Karoq new or secondhand.

The Volkswagen T-Cross stands apart from rivals with one of the best interiors, excellent refinement and an impressive amount of space despite its small footprint. That means it's big enough inside to be a genuinely useful car for small families, without causing trouble in small parking bays or on narrow streets. It’s also got more style than most conservatively-designed Volkswagen models. While the cabin is solid, it can look a bit cheap in places. The same can’t be said for driving the T-Cross though. It feels very reassuring on the road and has an excellent, punchy 1.0-litre petrol engine. As for trim, we’d look to the SE that builds on the generous spec of the S with 17-inch alloy wheels, adaptive cruise control and a variable height boot floor.

As you might expect, the Volvo XC40 is very Volvo in its premium materials and outstanding build quality, but the boxy SUV also doesn’t fall into the trap of being too car-like. That means the XC40 feels like a shrunken SUV rather than a supersized hatchback. It comes at a higher price than others in this list, but it’s also one of the best crossovers you can buy. The XC40 feels grown-up and classy, but it’s refreshingly minimalist. It trades on the fact that it offers the most comprehensive standard safety kit in the class too. You can even add Volvo’s semi-autonomous ‘Intellisafe Pro’ pack, which means the car will steer, brake and accelerate for you in the right conditions. The entry level engine - T2 - is a 129PS 1.5-litre petrol turbo with front-wheel drive and a manual gearbox. The T3 is the same petrol engine with 163PS, and a choice of the manual or an eight-speed automatic gearbox. 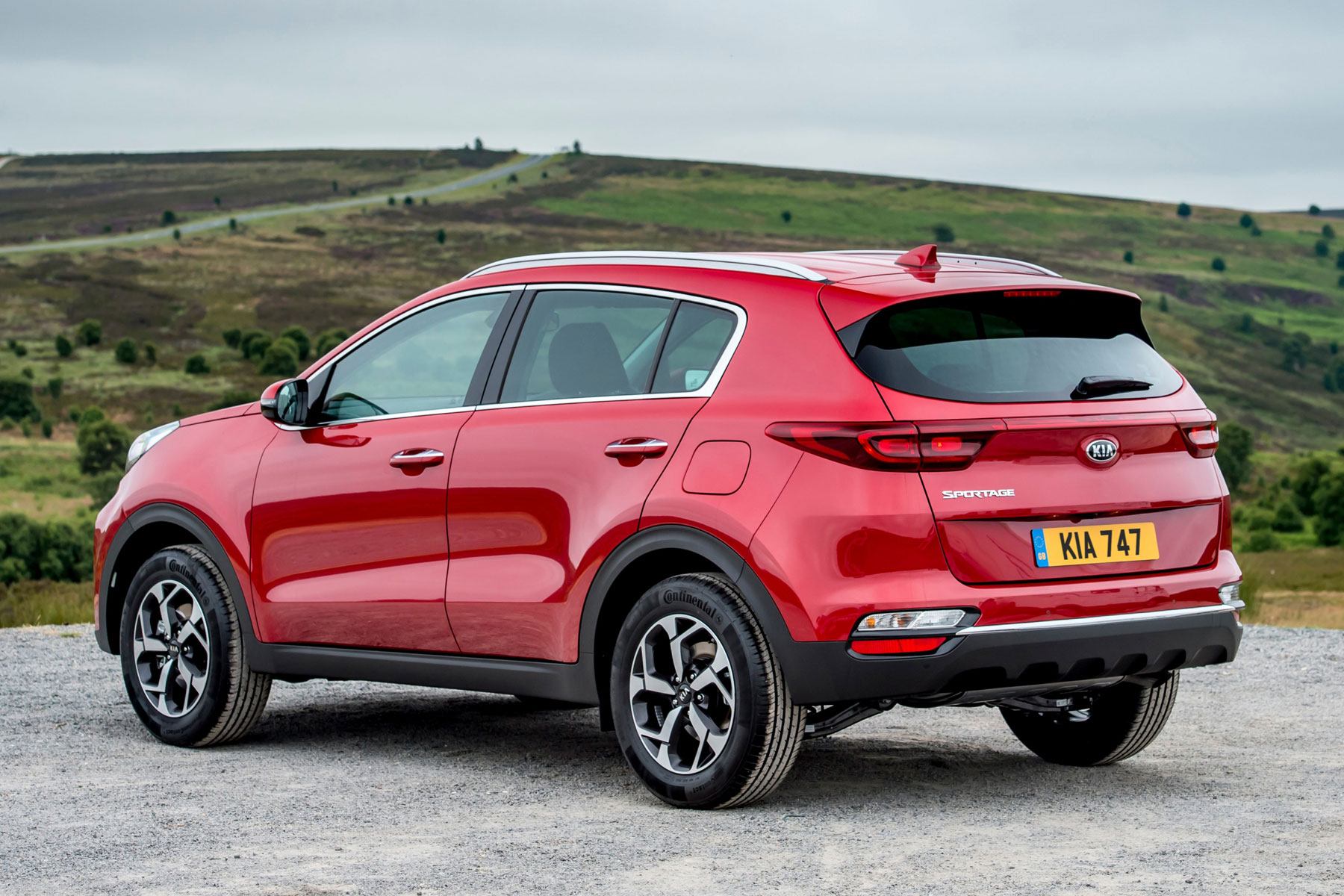 The Kia Sportage has a lot going for it, despite losing out on style points to rivals like the Peugeot 3008. The Sportage is an affordable, practical crossover with a seven-year, transferable warranty all new models get as standard. In fact, as far as family cars go - the Sportage is hugely desirable. On the road, it’s a good all-rounder with a cushioned ride quality. Sportage models from 2018 onwards also got a redesigned front bumper and full LED headlights. The diesels are better than the petrols in the Kia Sportage, but if you want petrol, the 174PS T-GDi is a decent turbocharged unit.

The Renault Captur is a stylish small SUV with a range of efficient engines and a clever, spacious interior that makes it ideal for families. While not as fun or smooth to drive as competitors like the Volkswagen T-Roc- it’s also easy enough to find good, used examples. One of the Captur’s smartest features is its sliding rear seats, which allow you to vary the boot size from 422 to 536 litres, while it expands to 1275 litres with them folded down. The inside feels well-thought-out and features soft-touch materials - particularly in higher-spec Capturs. In fact, all models feel well equipped, with a seven-inch media system, full LED headlights and cruise control. But it’s a shame then that the cabin quality depends on which trim you buy.

The newest Peugeot 2008 has the substance to back up the style, even if it’s price is higher than some rivals. The cabin sees lots of well thought out features and soft-touch materials, it’s also much more interesting than the cabin you get in a Skoda Kamiq, for example. The PureTech 130 petrol (a 1.2-litre three-cylinder engine) is impressive for its size while around town, light steering and excellent visibility make the Peugeot 2008 easy to manoeuvre into tight spaces. While it’s good enough on faster roads, it’s certainly more at home around town. It’s quite a practical choice too, with a 434-litre boot and little in the way of a lip, making loading bulky items easy. If you need more space, the rear seats drop to provide 1467 litres of room. 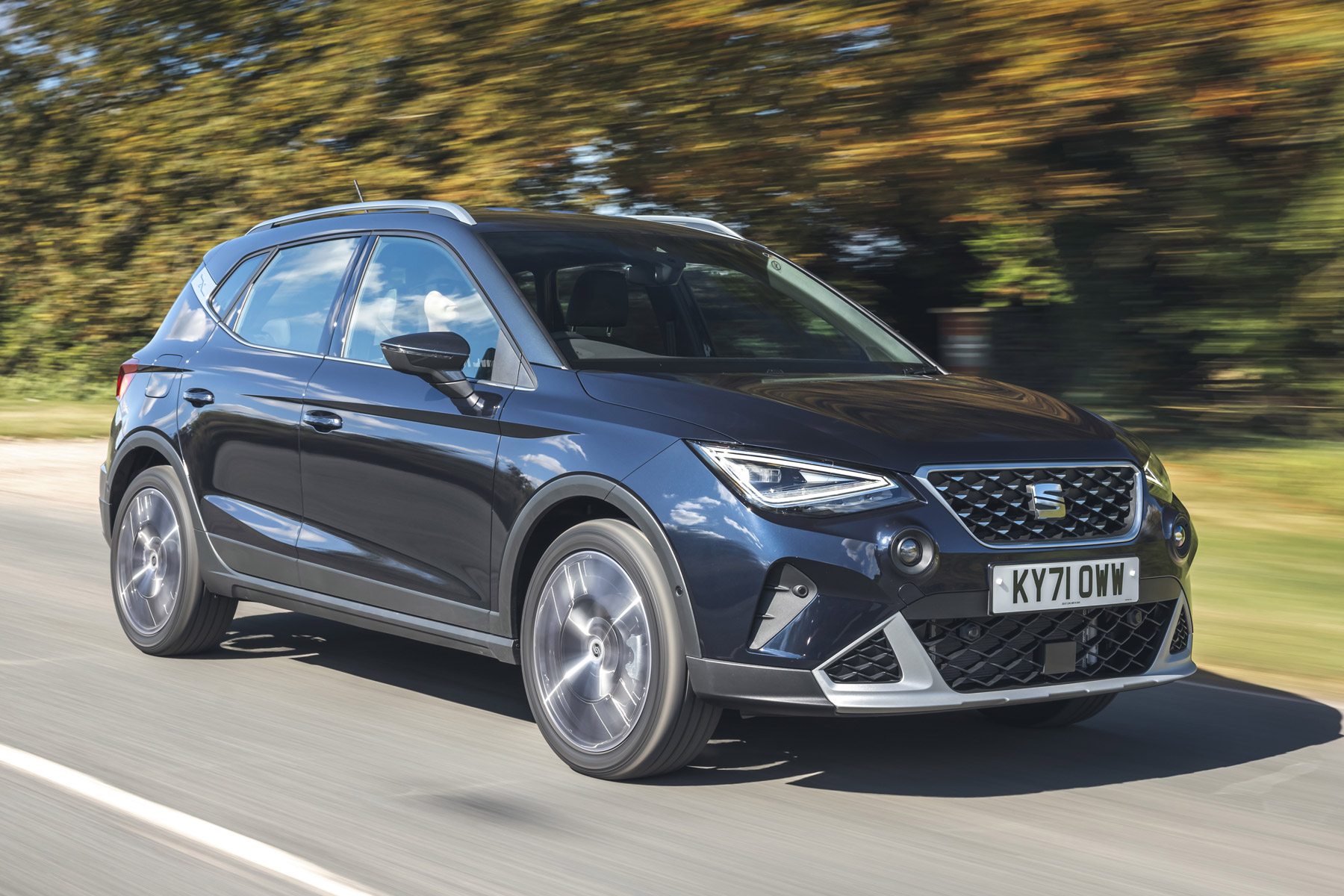 The SEAT Arona is a jacked-up, more practical version of the sporty SEAT Ibiza hatchback. That means it gets that popular SUV styling but it’s still easy to park and drive in congested urban traffic. There are more practical alternatives and interior quality could be better, but we think the peppy performance from the 1.0-litre petrol engine and plenty of on-board equipment make up for some of the pitfalls. The sporty looks and keen handling are great enjoy driving, but this car does have a firm ride, especially FR and FR Sport trims. Our pick of the engines is the 115PS 1.0-litre turbo, since it strikes a fine balance between performance and fuel efficiency. As for practicality, the Arona has a 400-litre boot, or 1280-litre with the seats folded down - and every model gets a height adjustable floor, so there’s no annoying boot lip.

The Countryman is the biggest car MINI builds. In fact, it’s a very big MINI - but it’s also the best one. There are plenty of used models about if you’re willing to pay for the badge and the styling. The MINI definitely feels premium, with a smart interior that has lots of high quality and soft touch materials. But it’s also practical, and will hold its value well because it’s so desirable. Standard equipment levels are good, too, with all models getting DAB, navigation, Bluetooth and cruise control. MINI’s Emergency E-call is also included, which means the car will automatically call the emergency services in the event of an accident. The 450-litre boot is bigger than what you’ll find in most small SUVs and will easily be able to carry a couple of suitcases or a child’s buggy, although the narrow opening will make it tricky to fit anything larger.

The HR-V is a versatile and reliable little SUV with a decent price tag to boot. It represents decent value for money (especially once depreciation takes a few grand off the list price), and it’s a lot more practical than the likes of the Nissan Juke. However, it rides quite harshly and the interior can’t compete with a host of impressive rivals in the crossover class. It combines dated graphics with slow responses and isn’t even available with Apple CarPlay and Android Auto. If you can stretch to it, we’d recommend the HR-V Sport. Its turbocharged engine has the grunt that’s missing from the standard petrol, while its red interior injects a bit of much-needed brashness. If you’re not fussed about performance, the SE model offers things like a reversing camera, extra safety kit and dual climate control are all desirable features.